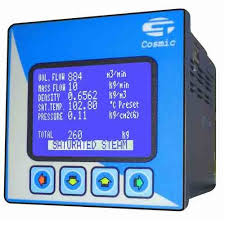 For liquids whose volume expands or contracts with changes in Temperature like some hydrocarbons, we have Liquid Flow Totalisers with Automatic Temperature Compensation.

For Gases which are compressible, and whose density changes with changes in Pressure and Temperature, we have Gas Flow Totalisers which have in-built automatic computations of Density of the gas at flowing conditions.


Using advanced algorithms involving the physical and chemical properties of the flowing gas, these units compute the actual mass of the Gas flowing irrespective of whether the Gas has expanded or contracted due to temperature and pressure or has changed state (liquified or gasified).

For Steam applications, we have Steam Flow Totalisers which compute and totalise the actual mass of flowing steam in Kgs or Tons.


With on-line automatic density compensation both for saturated or superheated steam, you get the final figure of Totalised mass of steam.

for Steam we have Steam Flow Computer SFC146

for Gas we have Gas Flow Computer - GFC147